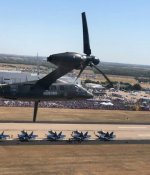 As the U.S. Army-led Joint Multi-Role Technology Demonstrator (JMR TD) program wraps up, Bell’s revolutionary tiltrotor continues to turn heads with outstanding performance and shines a spotlight on the benefits of modernization. After two-years of highly successful flight demonstrations the Bell V-280 Valor continues to showcase new capabilities to show how the aircraft meets the… Read More ›

Airbus delivers first H145 for the German Armed Forces’ search and rescue service ahead of schedule.

Airbus Helicopters has delivered the first H145 for the German Armed Forces’ (Bundeswehr) search and rescue service to the Federal Office of Bundeswehr Equipment, Information Technology and In-Service Support (BAAINBw), several months before the agreed deadline. A total of seven helicopters of this type were ordered to renew their ageing Bell UH-1D search and rescue fleet. “We… Read More ›

The F-35A is now below $80 million; lower cost than legacy aircraft The F-35 Joint Program Office and Lockheed Martin (NYSE: LMT) finalized a $34 billion agreement for the production and delivery of 478 F-35s at the lowest aircraft price during the history of the Program. This contract includes all U.S., International Partners and Foreign Military Sales… Read More ›

The World’s Best Turboprop – Better Than Ever: Pilatus Reveals the PC-12 NGX

During the National Business Aviation Convention & Exhibition (NBAA-BACE) in Las Vegas, Pilatus took the wraps off the industry’s most advanced and versatile single-engine turboprop – the PC-12 NGX. The brand-new PC-12 NGX incorporates an improved engine, smarter avionics and a completely redesigned cabin with larger windows, making this third generation of the PC-12 airframe… Read More ›

End of the out of the office

It was a long silence and for that we ask sorry, in fact it was an unplanned out of the office long period, Lots of news and occurrences happened during this time, that`s is the main Aviation characteristic always at the speed of the light, this is a challenging activity we love, We`ll re-start our… Read More ›

Continues taking a human-centered approach to the joy of driving; contributing to the earth, society and people Mazda Motor Corporation announced electrification and connectivity strategies that build on the company’s human-centered development philosophy, aiming to further advance the joy of driving, provide both drivers and passengers with peace of mind through an enhanced sense of… Read More ›

Data breaches, when information like your username and password are stolen from a website you use, are an unfortunate part of life on the internet today. It can be hard to keep track of when your information has been stolen, so we’re going to help by launching Firefox Monitor, a free service that notifies people… Read More ›

Today we’re releasing the first beta version of our upcoming Brave 1.0 browser for testing on our new Brave Beta Channel. This beta is a work in progress for developers and users who would like to see our latest advances. On September 6th, we released the first developer version (0.55) of Brave 1.0 on the Brave Developer Channel, and… Read More ›

Originally posted on Travelling with Lyn:
Not far off the highway and only a short 10 minute drive from Taraunga is McLaren Falls Park which is 190 hectares of parkland set alongside Lake McLaren. We drove up early enough to enjoy coffee at the café before our bush walk however the café was closed when…

Sumday Sweetness  — Everything I Never Told You

It’s a gray, windy, wet day here. Here’s some pretty things to color the day with feminine charm and epic feline goodness. Long live Tucker and Georgie. Of course , I had to throw in some T Swift. Happy Sunday. 💕. New poem coming Wednesday. via Sumday Sweetness  — Everything I Never Told You

Since Saturday, the 185th Oktoberfest on the Theresienwiese has once again been thrilling millions of visitors from all over the world. This can mean only one thing: it is time for the BMW Wiesn Sport-Stammtisch. For the ninth time, BMW invited well-known athletes and guests from various sports, as well as its sport and brand… Read More ›

Smart forease: As uncompromising and fresh as the brand

smart celebrates its 20 anniversary at the Paris Motor Show (4 to 14 October) with a show car that interprets and embodies urban driving fun in a refreshing way. The smart forease is extroverted and offers an uncomplicated solution for urban mobility. Seated under the open sky, the driver is at the centre of the hustle… Read More ›

KLM’s AR hand baggage check uses a transparent, virtual KLM suitcase, which indicates the permitted dimensions for hand baggage on board. AR technology makes it possible for a virtual image to be placed in reality and to be used interactively. This makes it easy for a passenger to check at home whether their hand baggage… Read More ›

The all-women parachuting team has proven its capabilities in international competitions. A world-class parachuting squad requires many of the same qualities that have driven Airbus’ success around the globe: precision, focus and a great team spirit. This is according to Pascale Dumarcet, who is perfectly-positioned to compare the two activities: she’s a design office engineer… Read More ›

Swiss premiere for the IWC Racing Team at the Arosa ClassicCar

The GT3 Racing No. 15 Lexus RC F GT3 finished seventh in Sunday’s IMSA WeatherTech SportsCar Championship race at WeatherTech Raceway Laguna Seca with drivers Jack Hawksworth and David Heinemeier Hansson. The driver duo had the No. 15 Lexus as high as fourth place, however damage to the grille slowed the RC F GT3 during… Read More ›