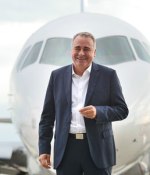 Stewart R. Cordner has been appointed today as Senior Vice President Commercial for SuperJet International (SJI). He joins SJI to take a leading role in the Sales & Marketing activities of the Sukhoi Superjet 100 (SSJ100) Program. Stewart and his team based in Venice (Italy) will have the responsibility for delivering on SSJ100 sales and… Read More ›

The final assembly team at Dassault Aviation in Bordeaux-Merignac (France) opened the doors of Charles Lindbergh Hall today to show the world the company’s newest and most advanced aircraft, the Falcon 6X. “Today’s rollout is a significant achievement. I am very pleased to present the addition of an all-new aircraft design within the Falcon family,… Read More ›

The EcoPulse™ distributed propulsion hybrid aircraft demonstrator – which is being developed by Daher, Safran and Airbus with the support of France’s CORAC civil aviation research council – has successfully passed its Preliminary Design Review as a first key step toward validating the project’s feasibility and firming up the architecture for a first flight scheduled… Read More ›

The European Union Aviation Safety Agency (EASA) published a Proposed Airworthiness Directive (PAD) concerning the Boeing 737 MAX for public consultation, signalling its intention to approve the aircraft to return to Europe’s skies within a matter of weeks. The Boeing 737 MAX was grounded by EASA on March 12, 2019, following two accidents with… Read More ›

“Korean Air has been operating ten A220s and these aircraft are used on our domestic and short-haul routes. Thanks to its more fuel-efficient engines, Korean Air’s GTF-powered A220s have lower operating cost, which enables us to utilize the fleet effectively,” said Lee Soo Keun, chief operating officer at Korean Air. “It’s important to us… Read More ›

Bye Aerospace, developer of the eFlyer family of all-electric aircraft, and Safran Electrical & Power, a world leader in aircraft electrical systems, announced that a Cooperation Agreement has been signed to equip the eFlyer 2 & eFlyer 4 aircraft with the ENGINeUS™ electric smart motors. Bye Aerospace is FAA-certifying the two-seat, all-electric eFlyer 2 for… Read More ›

Textron Aviation Inc., a Textron Inc. (NYSE:TXT) company, announced the 10th anniversary of the first Cessna Citation CJ4 business jet delivery which took place on April 20, 2010. Regarded for its incredible versatility and reliability, the Citation CJ4 is valued by customers around the world for a wide range of missions including, air ambulance, maritime patrol, search… Read More ›

GE Aviation powers two-thirds of U.S. military fighters and helicopters and understands that its military customers continue to face aircraft issues related to age, maintenance, supply and support. The more engines and components produced enables more aircraft availability at any given time. In the last month alone, GE Aviation has been awarded more than $476… Read More ›

Rolls-Royce has invited a group of leading companies to collaborate on Emer2gent, a new alliance of data analytics experts challenged with finding new, faster ways of supporting businesses and governments globally as they recover from the economic impacts of COVID-19. Early alliance members are Leeds Institute for Data Analytics, IBM, Google Cloud, The Data City,… Read More ›

Pratt & Whitney customers heading to the front lines in a time of need.

In the face of Covid-19, aircraft manufacturers and operators around the world have shifted their operations from transporting passengers to finding creative ways to help ease the pressure in times where urgent support is needed. Many companies have found ways to create a positive impact on the current situation. Embraer Embraer, manufacturer of several Pratt… Read More ›

Safran has adapted the Easybreath Subea snorkeling mask from sports retailer Decathlon to protect medical personnel from airborne droplets that could transmit the coronavirus, in conjunction with the engineering firm Segula Technologies and with support from the French Armed Forces Biomedical Research Institute (IRBA). Safran and Segula Technologies are offering open access to the files… Read More ›

As the U.S. Army-led Joint Multi-Role Technology Demonstrator (JMR TD) program wraps up, Bell’s revolutionary tiltrotor continues to turn heads with outstanding performance and shines a spotlight on the benefits of modernization. After two-years of highly successful flight demonstrations the Bell V-280 Valor continues to showcase new capabilities to show how the aircraft meets the… Read More ›

Air Canada takes delivery of its first A220

Air Canada has taken delivery of its first A220-300, designed, built and delivered from the Mirabel A220 programme facilities in Canada. The first aircraft out of an order of 45 will enter service in January 2020, making Air Canada the first airline to operate the A220-300 in North America. The A220 will enable the Montreal-based… Read More ›

Airbus delivers first H145 for the German Armed Forces’ search and rescue service ahead of schedule.

Airbus Helicopters has delivered the first H145 for the German Armed Forces’ (Bundeswehr) search and rescue service to the Federal Office of Bundeswehr Equipment, Information Technology and In-Service Support (BAAINBw), several months before the agreed deadline. A total of seven helicopters of this type were ordered to renew their ageing Bell UH-1D search and rescue fleet. “We… Read More ›