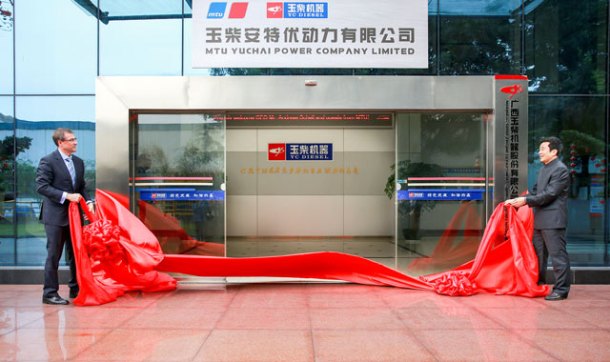 Yan Ping, Chairman of Guangxi Yuchai Machinery Company, and Andreas Schell, President of the Power Systems division of the Rolls-Royce Group, came together to unveil the company logo and celebrate the establishment of the joint venture. For both companies, it is a milestone development that will enable them to anchor their position in new markets and sharpen their competitiveness.

The mission of the joint venture, based in Yulin in southern China where GYMCL’s headquarters is located, will be to build engines of version 03 of MTU’s highly successful Series 4000. This unit will be suitable for use in the O&G and power generation industries. Production machinery with the capacity for delivering up to 1500 engines per year is currently being procured and will be set up in Yulin. Production operations – comprising engine assembly and testing – are to kick off in spring 2018. General Manager of the joint venture is Sebastien Jin, who previously headed Business Development in China at MTU.

“Yuchai, with its technological prowess, sales network, and production potential is seen by Rolls-Royce Power Systems as the ideal partner for its MTU brand,” said Andreas Schell during his visit to Yulin. He firmly believes that the MTU Yuchai Power joint venture promises to be the starting point of a long-lasting partnership of great potential, and that by joining forces, both partners will have everything it takes to be successful on the Chinese market, Schell said.

Yuchai’s Chairman Yan Ping also sees the joint venture as highly significant to his business. “Both partners stand to reap huge benefits from this enterprise, which fully accords with the overall strategy of Guangxi Yuchai Machinery Company.” Ping emphasized that his business was ready to deepen its connections with MTU and explore new paths.