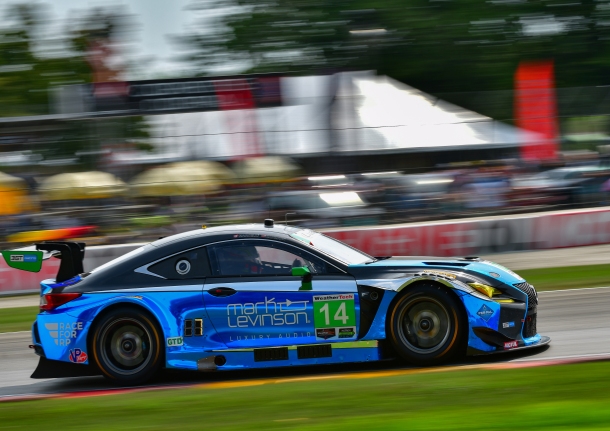 Baumann started the sprint race second behind the wheel of the No. 14 Lexus and held his position during his initial stint around the 14-turn, 4.048 mile Wisconsin road course. The driver duo swapped spots in the RC F GT3 under green-flag conditions on Lap 21 and Marcelli ran the remainder of the race in the top-10 before finishing sixth on the longest circuit of the season.

The No. 14 Lexus has registered five top-10 finishes in eight GTD races this year and currently ranks fifth in the provisional championship standings. Lexus is currently fourth in IMSA’s provisional GTD manufacturer championship points with three races remaining this year.

The 3GT Racing No. 15 RC F GT3 did not compete in the race at Road America after an incident during the morning warm-up session caused damage to the Lexus entry.

Lexus Racing Quotes
Dominik Baumann, No. 14 Lexus RC F GT3
How was your race today?
“I took the start and I lost a position. He (Bryan Sellers) just had a better run through (turns) 1 and 3 so I was a bit stuck behind the GTLM’s and took the wrong line. But, I got the position back at the end of the straight on the second lap, which was good for us. After that point, from lap 2 to the first yellow, I just managed to get up to the front. He (Patrick Long) was pulling a little bit away, but was not a major problem, he was maybe three or four seconds ahead, but I pulled the gap to the Porsche in front of me. The Lexus felt okay until that point and then we pitted the first time after about 40 minutes and we did tires and fuel but we didn’t do the driver change because one driver has to do 45 minutes. Then, it was a different strategy because we did the driver change two laps after the first pit stop. I gave the car to Kyle (Marcelli) and we lost some time on the pit stop so we came out in seventh or eighth and then it’s hard to come back. Kyle did a great job. Maybe on strategy, maybe we were unlucky. One time they went green too early and we had a 30 second gap to the back, which was unfortunate.”

Kyle Marcelli, No. 14 Lexus RC F GT3
Can you take us through your race today and the closing laps that seemed quite eventful?
“Eventful is an understatement. It was a difficult race. It was a closer race than I would’ve expected here at a circuit of this length. This is the longest race track that we go to all season and the entire GTD field was nose-to-tail. There were a few things we could’ve done differently with our race strategy today, but you get split seconds to make decisions. At the end of the day the race was a lot closer than I imagined it would be and some of those split second decisions really did matter. I was pretty happy with my first stint. I was really happy with my out laps. As soon as I came out of the pits I had the Audi and Acura behind me and I was able to put a gap on them. The next scenario there was a caution and it went green very, very early and we were about a half a lap behind, so that set us back on the leaders. Then, the final stint it was a dog-fight. I was having some struggles with the braking, but the car was really strong in the fast corners so I had to make the most of the fast corners to open up a gap. At the end of the day it was literally a dog-fight. It was nose-to-tail, door-to-door. I think every car on the grid had some contact. It was probably really exciting to watch. My heart was pumping the whole time.”