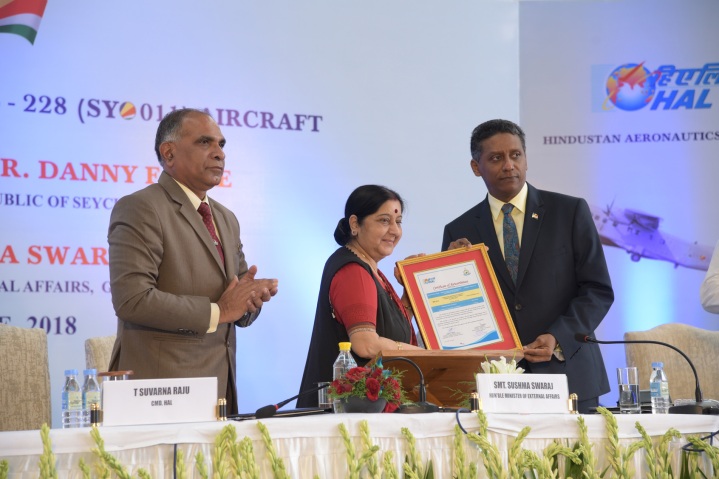 The External Affairs Minister Mrs Sushma Swaraj handed over HAL Do- 228 aircraft to the President, Republic of Seychelles, Mr. Danny Faure at a ceremony in New Delhi today. With this, the Maritime surveillance of the island nation received the much needed boost.

Appreciating India’s support, Mr.  Faure described the `momentous occasion’ as historical day and said the inclusion of HAL Do-228 aircraft would bolster the coastal surveillance of Seychelles and provide strategic depth to policing its extensive Exclusive Economic Zone (EEZ). The aircraft has come at the right time and would be flown on the forthcoming 42nd Independence Day of Seychelles on June 29, signifying the strong relations between the two countries.

Describing the event yet another milestone in furthering bilateral defence cooperation between India and Seychelles, Mrs Swaraj said, “The handing over of HAL Do 228 to Seychelles reflects the firm commitment and continued engagement of the Government of India in further developing, consolidating and expanding the comprehensive multifaceted cooperation between India and Seychelles”. Mrs Swaraj also handed over airworthiness certificate of the aircraft to the President of Seychelles.

General (Dr) V K Singh (Retd) Union Minister of State for External Affairs, who was present on the occasion, handed over the symbolic key to the President of Seychelles.

Mr. T Suvarna Raju, CMD, HAL in his welcome address hailed the event as `proud moment’ for HAL as the aircraft  has been delivered ahead of schedule and accepted by the Seychelles Air Force. “We have provided hands-on training to the pilots and technical staff from Seychelles.  We are committed to extend full-fledged support to the teams involved with its maintenance and operations of the aircraft”, he added.

About the aircraft:  The Do- 228, manufactured by HAL is equipped with combination of 360 deg Surveillance Radar, Forward Looking Infra-Red System, Satellite Communication, Traffic Collision and Avoidance System, Enhanced Ground Proximity Warning System and host of other customer specified sensors.

The first such aircraft was handed over to Seychelles on January 31, 2013 much ahead of contractual delivery schedule.  Significantly, Prime Minister of India,       Mr. Narendra Modi during his visit to Seychelles in March 2015, announced one additional Do-228 aircraft to Seychelles. Accordingly, the contract for Supply of Do-228 to Seychelles was signed between HAL and MEA on March 16, 2017 followed by another contract between Government of Seychelles and HAL on March 29, 2017.

The HAL Do-228 aircraft is a high wing monoplane with a cantilevered wing and two turboprop engines in wing-mounted pod designed for multipurpose utility like EEZ Monitoring, Maritime Surveillance, Pollution Monitoring and Control, Search and Rescue and commuter services.  The cockpit is designed to accommodate two crew members and is fitted with duplicate controls. The cabin can accommodate 19 passengers in commuter configuration.

It is noteworthy that HAL Do-228 has found wide acceptability in Maritime Surveillance and Patrol roles. It scores over larger aircraft for such applications due to similar endurance and range with full mission equipment, low operating cost, ease of maintenance, STOL (short take off- landing) capability – all at much less acquisition cost offering an optimum solution for Maritime applications.

Currently, the Dornier aircraft is produced at HAL’s Transport Aircraft Division, Kanpur. They are proven workhorse of Indian Armed Forces for maritime related roles and have established their versatility in variety of roles.