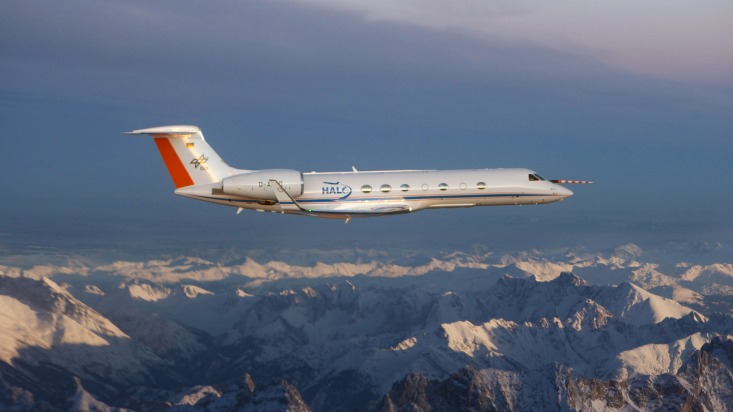 Effective monitoring of greenhouse gases is required to achieve ambitious targets for limiting greenhouse gas emissions. In addition, the sources and sinks of greenhouse gases must be understood as precisely as possible to produce reliable climate forecasts. From mid-May to mid-June 2018, a flight test campaign led by the German Aerospace Center (Deutsches Zentrum für Luft- und Raumfahrt; DLR) is contributing to this international effort.

Effective monitoring of greenhouse gases is required to achieve ambitious targets for limiting greenhouse gas emissions. In addition, the sources and sinks of greenhouse gases must be understood as precisely as possible to produce reliable climate forecasts. From mid-May to mid-June 2018, a flight test campaign led by the German Aerospace Center (Deutsches Zentrum für Luft- und Raumfahrt; DLR) is contributing to this international effort. The High Altitude and Long Range Research Aircraft (HALO) is concentrating on the two most important anthropogenic greenhouse gases – carbon dioxide (CO2) and methane (CH4). It is testing innovative instruments for measuring greenhouse gas concentrations; data is being acquired over the whole of Europe and as far away as North Africa. A Cessna owned by DLR and another owned by the Free University of Berlin (Freie Universität Berlin; FUB), each equipped with high-precision instruments from the University of Bremen, are also being used in the ‘Carbon dioxide and methane mission for HALO (CoMet) mission. In addition DLR’s Dornier Do 228-212 (D CFFU) and a Falcon 20 research aircraft operated by the mission’s French partners, the national facility for airborne research (Service des avions français instrumentés pour la recherche en environnement; SAFIRE), the National Center for Scientific Research (Centre national de la recherche scientifique; CNRS) and the national space agency (Centre national d’études spatiales; CNES) are participating in the campaign. Flights are taking place over Berlin, the coal-mining region of Lusatia on the German-Polish border and the mining regions of Poland, among other locations.

“At least 63 flight hours are planned for the HALO missions over European urban areas, ground-based monitoring stations and coal mines by mid-June,” says project leader Andreas Fix from the DLR Institute of Atmospheric Physics. The three smaller aircraft will contribute an additional 80 flight hours. The HALO research aircraft is equipped with a total of seven instruments for the detection of greenhouse gases and measurement of other meteorological parameters, as well as to collect air samples. “We want to obtain a detailed understanding of the sources and sinks of greenhouse gases using independent measurements. Methane emissions may originate from coal production, the oil and natural gas industry, landfill sites, livestock farming or rice cultivation. In addition, there are also natural sources such as wetlands and permafrost,” continues Fix. “In order to quantify the influences of anthropogenic methane on climate change, both the man-made and natural sources of the gas must be investigated and the underlying processes understood.” At present, there is a major dearth of research in this area.

The state-of-the-art HALO research aircraft will take off from its home base in Oberpfaffenhofen, near Munich, for its measurement flights in the target regions, which range from Finland to North Africa. To enable the researchers to get an accurate picture of the distribution of greenhouse gases using the remote sensing instruments, HALO will initially fly at an altitude of eight to 15 kilometres. At selected locations, it will then fly in descending spirals until it is close to the ground, in order to obtain highly accurate information about the height distribution of greenhouse gases. The air flowing into the inlets will be constantly analysed by the on-board instruments. In addition, the researchers will collect up to 12 air samples per flight, in order to examine their various components more thoroughly in the laboratory.

“Carrying out these kinds of missions, especially in the busy airspace over Europe, requires a lot of coordination with the various air traffic controllers in the countries that we fly over,” says research pilot Marc Puskeiler. “Agreements have to be made with air traffic control several days in advance. This places heavy demands on weather forecasting and flight planning, because the researchers need cloud-free measurement conditions as far as possible,” adds Frank Probst of the DLR Flight Experiments facility, which is managing the operation of the DLR aircraft during the CoMet mission.

While HALO is primarily conducting measurements at altitudes of up to 15 kilometres, the two Cessna aircraft from DLR and FUB are investigating the distribution of greenhouse gases in the lower part of the atmosphere, up to an altitude of three kilometres. In doing so, they sometimes spiral upwards in order to obtain measurements at the planned maximum altitude. The joint HALO flights with the Cessna aircraft are focussing on two areas that are particularly interesting from a scientific perspective. The first is the Upper Silesian coal-mining area, which is one of Europe’s largest sources of methane due to the mine gases emitted by the many anthracite mines. The second is the Berlin area, which is interesting by virtue of its ‘island status’, surrounded as it is by sparsely populated regions, which makes it a good location for researching the greenhouse gas flows from a major city. The project is supported by Polish partners from AGH University (Akademia Górniczo-Hutnicza) in Kraków. During an experimental flight to Poland, a fourth aircraft, the DLR Do-228, will take part in the CoMet mission. It is equipped with a hyperspectral sensor. The researchers are testing whether this remote-sensing instrument, which is usually used for imaging Earth’s surface, is also capable of visualising strong sources of methane.

Carbon dioxide is widely known to be the most important greenhouse gas in the atmosphere caused by human activities. “What is less well known is that despite the fact that its concentration in the atmosphere is 200 times lower than that of carbon dioxide, methane also has a major impact as a greenhouse gas. According to a report by the Intergovernmental Panel on Climate Change in 2013, over the first 20 years, the climatic effect of an emitted methane molecule is 86 times greater than that of a carbon dioxide molecule. At 100 years, this figure reduces to a 28-fold climate impact, which is still considerable, because methane breaks down faster in the atmosphere,” explains Fix. Overall, the share of global warming caused by carbon dioxide has been approximately 65 percent since the beginning of the Industrial Revolution, while methane makes up around 18 percent of all anthropogenic greenhouse gases. “Since 1750, the concentration of methane in the atmosphere has more than doubled, while carbon dioxide has increased by around 44 percent over the same period,” adds Fix. “A better understanding of methane concentrations in the atmosphere and strategies for reducing future methane emissions could make a significant contribution towards achieving the two-degree target.”

The CoMet mission, initiated by DLR, the Max Planck Institute for Biogeochemistry and the Universities of Bremen and Heidelberg, will be the first to include, among other instruments, the CHARM-F (CH4 Atmospheric Remote Monitoring) lidar measuring device, which offers high-resolution methane detection. “The new technology allows us to measure methane and carbon dioxide concentrations from a great distance, regardless of the amount of sunlight, and with a high accuracy,” explains Fix. Beginning in 2023, a similar instrument will monitor regional and global emissions of methane from space, on board the Franco-German ‘Methane Remote Sensing Lidar Mission’ (MERLIN) satellite. This will be an ideal complement to the Copernicus Sentinel 5P (precursor) and Sentinel 5 missions. The French Falcon 20 research aircraft will take part in one of the measurement flights to test the MERLIN technology. It carries a built in greenhouse gas instrument for taking comparative measurements while researchers on board HALO are testing the lidar technology that will later be used for MERLIN. The joint measurement flight is coordinated with ground stations and balloon ascents, and requires clear skies over most of France.

In addition to the CHARM-F lidar, HALO carries a cavity ring-down spectrometer developed by the Max Planck Institute for Biogeochemistry in Jena. This instrument measures the concentrations of the most important greenhouse gases during the flights, while a sampling system collects air samples for subsequent laboratory analysis. An optical spectrometer provided by Heidelberg University measures air pollutants emitted simultaneously with greenhouse gases. The mission’s two smaller research aircrafts are also equipped with state-of-the-art instruments. DLR’s Cessna Grand Caravan is supporting CoMet with greenhouse gas and wind measurements in the boundary layer, the lowest part of the atmosphere, and is equipped with a novel quantum cascade laser system, amongst other instruments. “The lower part of the greenhouse gas profile currently often dominates the total distribution by height in the vicinity of relevant sources of methane, such as those in Upper Silesia, and also has the greatest variability. With our measurements, we are contributing to the characterisation of the emissions of selected sources in detail,” says Anke Roiger, Head of the DLR Cessna Mission at the Institute of Atmospheric Physics. In addition, the Cessna 207 from FUB is carrying a passive optical spectrometer system (Methane Airborne MAPper; MAMAP), developed at the University of Bremen. This is performing wide-area recording of carbon dioxide and methane distributions.

The researchers have developed a number of forecasting models for the research flights, which predict where to expect higher concentrations of greenhouse gases under particular weather conditions. Flight planning is carried out on the basis of these models. “Our goal is an optimal measuring strategy for the CoMet mission, in order to bridge data gaps across Europe effectively and improve our models,” says Fix.

he scientific project partners are the German Aerospace Center (DLR), the Max Planck Institute for Biogeochemistry in Jena, the Universities of Bremen and Heidelberg, and the Free University of Berlin. In addition, research institutions from eight different countries are involved, together with international associations of monitoring networks and space agencies, all of which can benefit from this special flight mission. The CoMet research project is funded with approximately one million euro from the partner institutes and the German Research Foundation (Deutsche Forschungsgemeinschaft; DFG). In addition, the evaluation of the measurement results of the flight tests that are currently taking place, along with the further development and use of the instruments and models as part of the ‘Aircraft Remote Sensing of Greenhouse Gases with combined Passive and Active instruments’ (AIRSPACE) project, received funding of 3.9 million euro from the German Federal Ministry for Education and Research (Bundesministerium für Bildung und Forschung; BMBF).