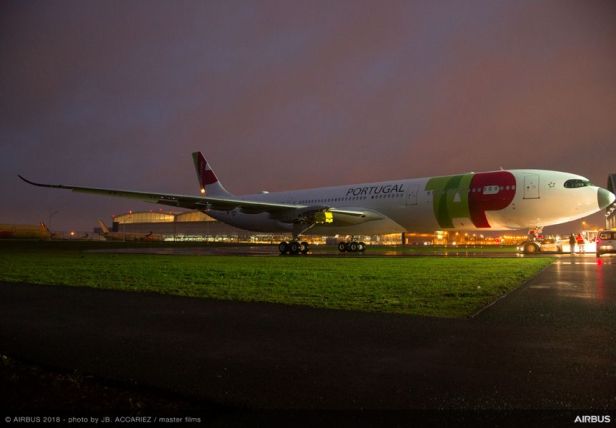 The initial two A330neo jetliners destined for an airline operator have rolled out of the paint shop bearing the red and green livery of TAP Air Portugal, which will become the launch operator of this new member in Airbus’ A330 family – the most popular widebody family ever.

Both aircraft received the Portuguese airline’s branding at paint facilities in the Toulouse region of southern France – location of the A330 final assembly line and home to Airbus headquarters. These jetliners include the “A330neo / first to fly” wording on the fuselage, underscoring their upcoming role as the first to enter commercial airline service.

When in operation, the aircraft will join TAP Air Portugal’s already large fleet of Airbus-built jetliners, composed of A330s, A340s and A320 Family versions. TAP Air Portugal has ordered 10 A330neo aircraft and will operate a similar number on lease.

The A330neo brings together unbeatable economics and the proven values of Airbus’ popular A330 product line. Equipped with extended-span wings incorporating upturned Sharklets wingtips, it is powered by new Rolls-Royce Trent 7000 engines.

Airlines will benefit from the 25 percent less fuel burn per seat compared to previous-generation competitors, along with reduced maintenance costs and the A330’s market-leading 99.5 percent operational reliability.