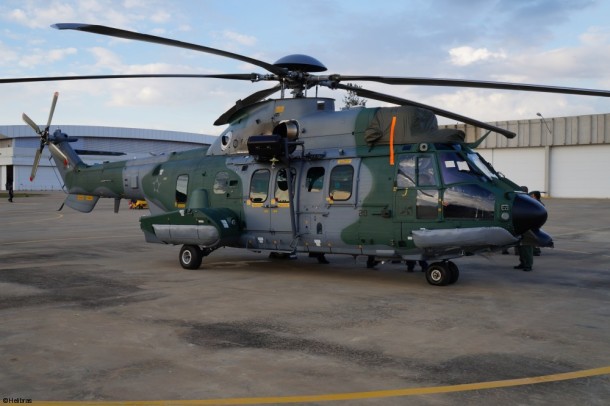 In the last few weeks Helibras has delivered two H225Ms to the Brazilian Armed Forces. Two additional ones will be delivered this year

In the last few weeks Helibras has delivered two H225Ms to the Brazilian Armed Forces.

The first one –destined to the Army- has been delivered in the full operational configuration, including specially designed mission systems unique to the Army. Based in Taubaté and operated by the 1º BAvEx, this is the ninth H225M to integrate the Brazilian Army’s fleet.

The second one – in full operational configuration for Combat SAR – has been delivered to the Air Force and will be based in Río de Janeiro to be operated by the 3º/8º GAV. This delivery brings the Air Force’s H225M fleet to 12 helicopters.

In all, the company is expected to deliver four H225Ms to the Armed Forces in 2017. “We are on track with the delivery schedule and we are confident, thanks to our highly skilled teams that we will deliver on time to the three Armed Forces “, said Richard Marelli, President of Helibras.

Brazil’s H225Ms are assembled at Helibras Itajuba’s plant. With the aim of achieving a significant level of national content Helibras has developed a local supply chain, which currently includes 37 Brazilian companies. Helibras also has a state of the art engineering centre which develops in-country specific mission systems for Brazil’s Armed Forces’ H225M.

With these two H225M deliveries, the Armed Forces’ fleet totals 28 H225Ms: 12 for the Air Force, 9 for the Army and 7 for the Navy. Deliveries for the remaining helicopters foreseen by the contract – a total of 50 H225M – are expected to be completed by 2022.

Other important H225M milestones this year include the qualification of the H225M naval combat version.