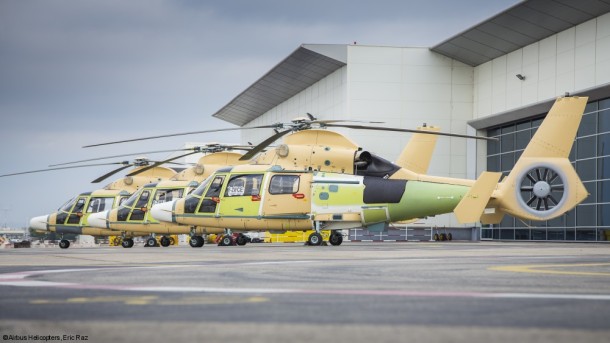 Marignane – Airbus Helicopters has delivered the first three of the 11 AS565 MBe Panther helicopters to Indonesia, ahead of contract schedule, at a ceremony at Airbus Helicopters’ headquarters in Marignane, in the presence of representatives from Indonesia’s Ministry of Defence and the Indonesian Navy.

This follows the contract signature in late 2014 with PT Dirgantara Indonesia for 11 AS565 MBe helicopters. The delivery of the remaining helicopters will run through to 2018.

“We are excited to witness the handover of the first three AS565 MBe helicopters to our partner today”, said Janick Blanc, Head of the Panther programme at Airbus Helicopters. “The AS565 MBe has been developed using state-of-the-art processes and this enhanced variant of the Panther will benefit from an increased maximum take-off weight at 4,500kg. This will provide increased mission capabilities, specifically for the anti-submarine warfare missions these rotorcraft are expected to perform”, he added.

Under the agreement, Airbus Helicopters will supply the AS565 MBe helicopters to its Indonesia industrial partner PT Dirgantara Indonesia, who will reassemble and outfit these rotorcraft in-country, acting as the design authority. This will notably cover the installation of the anti-submarine warfare (ASW) suite which includes a dipping sonar and torpedo launch systems, allowing the Indonesian Navy to carry out its most demanding missions.

This Indonesian MBe Panther programme is the latest of a long-standing relationship between Airbus Helicopters and PT Dirgantara Indonesia, who celebrated their 40 years of strategic partnership earlier this month. The two companies have delivered more than 190 helicopters together, through joint programmes over the last four decades.

“We have been working with Airbus Helicopters on numerous projects for many years by now, and this milestone today further illustrates the commitment both companies have towards this programme”, said Budi Santoso, CEO and President of PT Dirgantara Indonesia. “We look forward to receiving these green helicopters in Bandung, as we ready to start the installation of the mission equipment, and the subsequent qualification and certification of our future anti-submarine warfare helicopters”, he added.

Recognised as one of the world’s most capable light/medium anti-submarine warfare platforms, the AS565 MBe is equipped with two Safran Arriel 2N engines, which enhance the helicopter’s performance in high and hot conditions, while enabling it to achieve a top speed of 165 kt and a range of 780 kilometres. It also boasts a new main gearbox, the latest-generation tail rotor and a 4-axis autopilot that reduces crew workload and makes the most demanding missions easier to perform.