Pictures of the day: Airberlin

The name airberlin evokes memories of the company’s inaugural flight from Berlin – the start of a success story which is unparalleled in the airline industry: on 28th April 1979, a Boeing 707 took off from Berlin-Tegel for Palma de Mallorca. This inaugural flight was the start of airberlin’s success story. Nowadays airberlin is at home throughout the world. But the story of the company’s foundation began in the USA in a rather unusual way. During the oil crisis of the 1970s, the US pilot, Kim Lundgren, lost his job at Pan American in Europe. Instead of going back to the USA, he realised his dream and set up a charter airline. In 1978, the airline was incorporated in the US state of Oregon under the name “Air Berlin Inc.”. This was because at that time, before the reunification of Germany, air traffic to and from Berlin was restricted to airlines from the Allied countries. The fall of the Berlin Wall in 1989 brought a new challenge. Kim Lundgren lost his special privileges to Berlin and had to look for German majority shareholders.

In April 1991, Joachim Hunold purchased an 82.5% share in the company and thereby founded Air Berlin GmbH & Co. Luftverkehrs KG. The airline started off with two aircraft and 150 employees. airberlin flew passengers booked through German tour operators to holiday destinations in the sun on the Mediterranean Sea. In the summer of 1992 the airline was operating 15 flights a day. Today it operates up to 800 every day. In the 1990s, airberlin deployed a large number of aircraft at regional airports such as Paderborn/Lippstadt and Münster/Osnabrück. In this way the airline opened up growth markets and offered its passengers new travel options. In 1998 airberlin introduced seat-only sales and started the Mallorca Shuttle, which marked the company’s debut as a scheduled passenger airline. Today airberlin is the market leader in Palma de Mallorca. With its “City Shuttle”, which was introduced in 2002 to fly between Europe’s major cities, the airline also won a share of the international market.

In 2004 airberlin acquired a stake of almost 25% in the Austrian airline, NIKI. Its flotation on the stock exchange in 2006 provided the airline with new capital, where it had previously financed its growth from its own resources, and thus ensured its competitive capability. With the acquisition of the airline dba in the same year, airberlin now had an extensive domestic German route network. The takeover of dba also meant that airberlin gained attractive slots at Berlin, Dusseldorf, Munich and Frankfurt airports. Air Berlin PLC, the legal parent company of the airberlin group, was founded in England and Wales as a public limited company in 2005. The purchase of the leisure airline LTU in 2007 was a major step in the company’s history. This enabled airberlin to extend its offer with intercontinental flights.

In December 2011 airberlin and Etihad Airways established a strategic partnership, and in the spring of 2012 airberlin became a full member of the global airline alliance oneworld®. airberlin is now able to offer its passengers a global route network and has risen to become one of the world leaders in the international aviation industry. 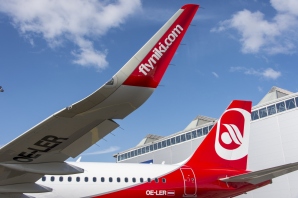