AirAsia hits half a billion guests! Sixteen years of blood, sweat and tears 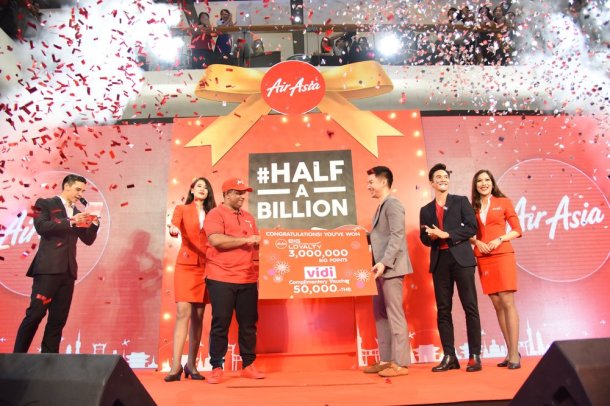 In just sixteen years, AirAsia has flown over 500 million guests to over 130 destinations, many of which are unique destinations that only AirAsia flies to.

AirAsia Group CEO Tony Fernandes said, “We started in 2001 with just 2 planes and 200 Allstars in Malaysia and carried 200,000 guests. Today, we have more than 200 planes, over 20,000 Allstars of 50 different nationalities and half a billion guests, 60% of which were first time flyers. Half a billion guests is no small feat — it is 7 times the population of Thailand, 16 times the population of Malaysia and about 80 percent of the entire Asean population (640 million, 2018*).

“We would like to attribute this incredible milestone to every single guest who has flown with AirAsia. We are delighted to have been part of the flying experiences and memories of so many people and communities around the world, especially Asean, making it a smaller place. We are also proud to have contributed positively to the region’s economy through tourism and job creation,” he added.

The 500 millionth guest, 34-year old Dr Panut Oprasertsawat took AirAsia over the half a billion mark when he flew from Phuket to Bangkok Don Mueang on 18 March 2018.

Dr Panut Oprasertsawat said, “I travel frequently between Bangkok and Phuket for work. AirAsia has always been my preferred airline due to their high flight frequency, affordable price and excellent services. Over the past decade, I am  able to manage my business at both places due to the easy access of air connectivity. I am truly excited to be part of this milestone.”

AirAsia is proud to be a market leader in air connectivity within Asean. Since its early days, AirAsia has initiated new routes which were previously unheard of, including between East Malaysia and Peninsular Malaysia, in order to bring communities closer and boost economic activities. The airline was also the first to introduce international flights to Bandung, Indonesia, which has now grown to be a key international hub.

The airline has also realised many of its Allstars’ dreams such as Kugan Tangiisuran, who started as a dispatch boy to now sitting in the flight deck as a co-pilot; Logan Velaitham, who was a cabin crew and now leads AirAsia Singapore as a CEO; first commercial female pilot in Malaysia, Captain Norasikin Che Onn and many more dreams of talented Allstars.

AirAsia will bring its #halfabillion celebration to selected destinations across the region, on the ground and in the air, while guests will be able to view a personalised video of their journey with AirAsia when they log into halfabillion.airasia.com.