Special promo with all-in fares from as low as RM199* one way! 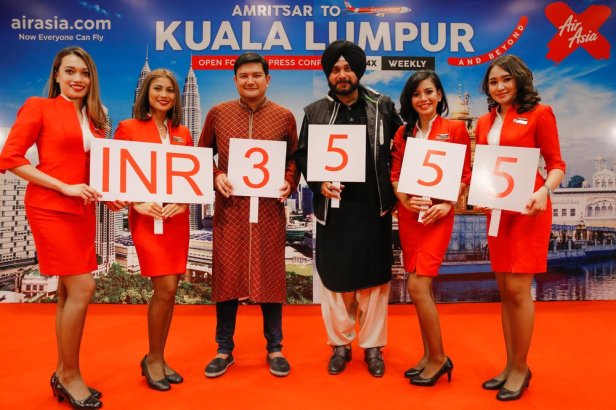 AirAsia X has announced the opening of a new direct route from Kuala Lumpur to Amritsar in Northern India as part of its expansion plan in India this year.

From 16 August 2018, the four times weekly service will provide guests access to Amritsar, which has a tremendous potential as a religious, tourism, commerce and trade destination. This route has the potential of an annual capacity of 156,832 seats between Kuala Lumpur and Amritsar.

AirAsia X Chief Executive Officer, Benyamin Ismail said, “Many Sikhs and Punjabis have been asking us to fly direct to Amritsar, home to the world famous Golden Temple, and we are pleased to be able to offer this direct service to this holy city.

“This new route is part of our efforts to strengthen our position in India, which offers us the possibility of expanding Europe and North America. AirAsia X will focus on promoting Amritsar along with our existing destinations, New Delhi and Jaipur as part of our overall campaign focusing on Fly-Thru traffic from markets like Indonesia, Australia and New Zealand,” said Benyamin.

Punjab Minister of Tourism & Cultural Affairs, Navjot Singh Sidhu said, “Having AirAsia X flying direct to Amritsar is important to Punjabis all over the world. It is a preferred destination not only for the Punjabi diaspora but also for many foreign tourists. Connectivity is the heart of tourism in Punjab and the airline offers us its established wide network of connectivity that will link Amritsar to the cities it flies to and the rest of the world.

“We welcome AirAsia X to Amritsar, and we are happy that Punjabi diaspora and foreign tourists from destinations within the wide network of AirAsia including Australia and New Zealand will be able to travel to Amritsar and Punjab,” he said.

Guests can also make use of AirAsia’s Fly-Thru service including Melbourne, Sydney, Singapore, Bali and Bangkok to connect to Amritsar from other cities within AirAsia and AirAsia X’s extensive network with just one additional stop.

Amritsar is one of the top destinations in Punjab in the northwestern part of India, which is underserved from the Asia Pacific region. The city is also home to Sikh’s most sacred shrines, the Harmandir Sahib (Golden Temple), and has plenty of historical monuments including Jallianwala Bagh, Wagah Border and Gobindgarh Fort.

To celebrate the new route announcement, AirAsia X is offering promotional all-in fares from as low as RM199* one way for the economy seat and RM699* one way for Premium Flatbed seats open for bookings on airasia.com from 2 May until 13 May 2018, and on AirAsia’s mobile app for the travel period between 16 August 2018 and 27 October 2018.

AirAsia X will operate four weekly return services between Kuala Lumpur and Amritsar on Tuesday, Thursday, Saturday and Sunday. The departing flight (carrier code: D7188) will take off from klia2 at 19:20 hours to arrive in the Sri Guru Ram Dass Jee International Airport in Amritsar at 22:30 hours. The return flight (carrier code: D7189) will depart from Amritsar at 23:45 hours and arrive in Kuala Lumpur at 8:05 hours.

*Promotional all-in-fares quoted are for one-way travel only inclusive of taxes and fees. Terms and conditions apply.

Note: All times listed are local unless otherwise stated.