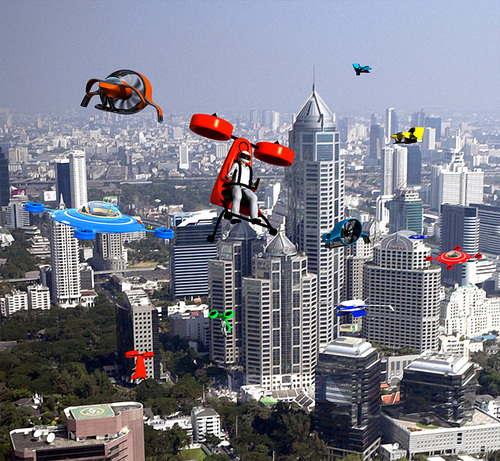 Every science fiction writer of the 1950’s seemed to incorporate some kind of personal flying machine. The prospect seemed glittering. People of apparently ordinary means could load up, take off and travel in uncrowded skies to visit relatives.

Today we have the same ambitions but a greater realism about the challenges that will present themselves. We are, however, also armed with infinitely greater technologies and so the time to re-examine such Personal Transportation Systems [PTS] is appropriate. Today’s concepts are more varied and more practical than Waldo Waterman’s “Whatsit” of 1935 with its detachable wings and car-like fuselage.

The literature is rich in both historical and current attempts to crack this attractive nut. Agencies such as NASA and Boeing down to individuals in sheds at home are equally taken with the concept. Some 70 concepts are being worked on today, some have reached flight trials and some remain, probably firmly, locked into the concept stage. None have yet been effectively marketed or sold on the world market although some, like the Wallis Autogyro come tolerably close to the concept. The design of PTS vehicles is extraordinarily varied with concepts for jet-packs, personal flying machines, aero-cars and others.

The more serious teams recognise that designing the air vehicle is only a relatively small part of overcoming the challenges. It seems likely that this small part will be solved in this century. The other challenges remain, although they too are receiving attention. The issue of control by an unskilled pilot, the doubtful quality of runways that will be used, the big issue of safety and congestion, the question of policing, of licensing and regulation, the resilience to bad weather and the pilot’s ability to take this into account are all issues that now hold the attention of the serious PTS builder.

Most builders follow the strict line of the PTS, a personal aircraft. But other ideas envisage the creation of individual lifting devices that could serve to lift one many in their singular form and when coupled together or separately attached to a load could lift heavier objects. Some single central controller is foreseen to manage the units and to direct the flight.