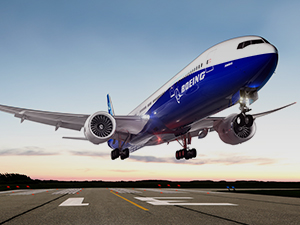 Recognized for leadership and advocacy for young women in aerospace industry.

“We are incredibly proud of Joan and the recognition she is receiving for her positive contributions to our industry,” said Kevin McAllister, president and CEO of Boeing Commercial Airplanes. “Joan is among a growing number of Boeing leaders who actively demonstrate what it means to be true champions for diversity and strong role models for our industry.”

Throughout her more than 30-year Boeing career, Robinson-Berry has promoted science, technology, education and mathematics across Boeing as well as in the communities where she has lived including Long Beach, Seattle, St. Louis, Chicago and Charleston. In particular she has focused on inspiring students to pursue technical education, drawing on her own experiences to illustrate how socioeconomic challenges can be overcome. She works tirelessly to bring a message of hope and confidence to students who need inspiration to aspire to careers in engineering, technology and development.

“This year, we have an exceptional list of awardees who were selected amongst the best and brightest in the industry,” said Shelli Brunswick, chairperson of Women in Aerospace. “Joan is a true leader for aerospace education, and she is especially tenacious when advocating for young women in this industry.”

Women in Aerospace annually recognizes women who have made significant contributions to the aerospace community. Boeing has been a corporate supporter of the organization since its inception in 1985, and throughout that time Women in Aerospace has recognized more than eight past and present Boeing leaders.