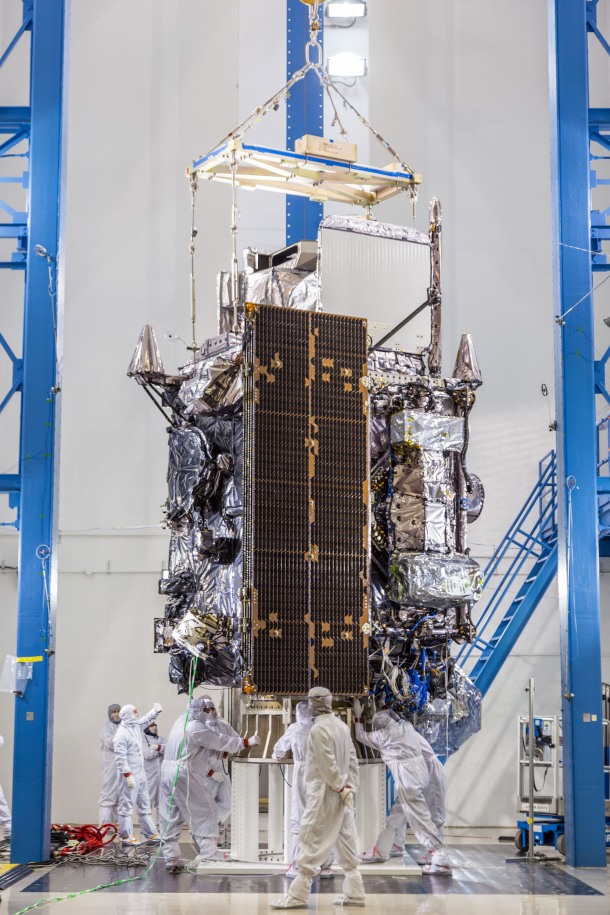 GOES-S undergoing acoustics testing in a specialized chamber at Lockheed Martin near Denver.

Lockheed Martin (NYSE: LMT) has completed assembly of NOAA‘s GOES-S weather satellite and is now beginning critical mechanical and environmental testing of the spacecraft. GOES-S is the second of four next-generation geostationary weather satellites called the GOES-R series, and will provide a major improvement in our nation’s weather observation capabilities leading to more accurate and timely forecasts, watches and warnings.

The GOES-S satellite is now undergoing environmental testing to simulate the conditions of launch and the extreme environment the satellite will experience in space. It recently completed a reverberant acoustics test and sine vibration test, both designed to expose the satellite to the sound and vibrations of a launch on a United Launch Alliance Atlas V 541 rocket.

“Mechanical and environmental testing is an important time for the program,” said Tim Gasparrini, vice president and GOES-R Series program manager at Lockheed Martin Space Systems. “This period validates the satellite’s overall design, assembly workmanship, and survivability during launch and on-orbit operation in the cold vacuum of space.”

In preparation for launch, the 20-foot-tall satellite will undergo a variety of tests including separation and deployment of solar arrays and antennas, shock tests, electromagnetic interference and compatibility testing, and thermal vacuum testing.

The first satellite in the series, GOES-R, was launched on Nov. 19 from Cape Canaveral Air Force Station, Florida. It recently was moved into its geostationary orbit and is going through a comprehensive post-launch test and checkout phase. Now in orbit, NOAA has officially changed its name to GOES-16.

NOAA funds, manages and will operate the GOES-R Series satellites. NASA oversees the acquisition and development of the GOES-R spacecraft, instruments and launch vehicle. The program is co-located at NASA’s Goddard Space Flight Center in Greenbelt, Maryland.

About Lockheed Martin
Headquartered in Bethesda, Maryland, Lockheed Martin is a global security and aerospace company that employs approximately 98,000 people worldwide and is principally engaged in the research, design, development, manufacture, integration and sustainment of advanced technology systems, products and services.