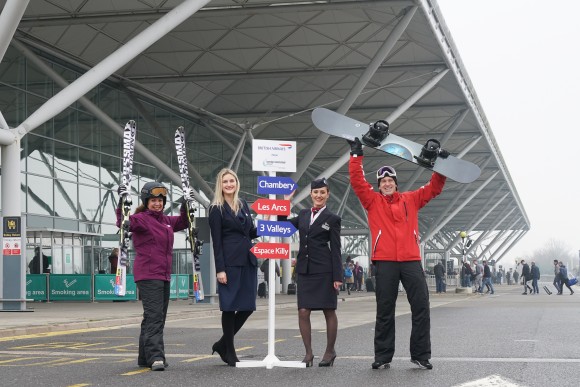 Winter sports fans will have a direct gateway to some of Europe’s top snow resorts from Stansted tomorrow (December 17) with the launch of new British Airways flights to the French Alpine city of Chambery.

The well-timed weekend flights will give customers easy access to some of the top snow and ski resorts like Val d’Isere, La Plagne, Meribel and Courchevel.

Each way fares are available for £49 on www.ba.com. Other fares which include ski carriage are also available.

British Airways started flying from Stansted for the first time in May this year, adding a fourth London airport to its network.

The new twice-weekly service to Chambery will complement the British Airways service from London City Airport which operates three times a week increasing to a daily service over the Christmas and NewYear period.

Luke Hayhoe, British Airways’ general manager commercial and customer said:  “British Airways has enjoyed a very successful first summer at Stansted and we are delighted to launch Chambery, our first winter-only service offering skiers and winter sports enthusiasts a gateway to one of the best Alpine snow regions direct from their doorstep.”

Mats Sigurdson, Stansted’s Aviation Director, said: “It’s fantastic news for passengers that British Airways is launching an exciting new route to Chambery to serve the Alpine ski resorts of France. The announcement is a real vote of confidence in Stansted and recognition of the strong demand that exists across the region and will provide passengers with even more opportunities to fly from their local airport this winter.”